Here we are, 2008's dedicated and talented Berkshire Trails staff. We have new leadership this year with Matt Moore stepping into the Regional Trails Coordinator roll and Connor Young returning from last year to fill a newly created Field Coordinator position, at which he is sure to excel. You can expect this 50% increase in administrative power to translate into more time in the field working along side our fantastic teen volunteer trail crews and trusty ridgerunners. The burliest teenagers in America and their three uber-qualified leaders have some great locations to work at this year, including Mt. Greylock, Upper Goose Pond and October Mountain. This season's five Ridgerunners will continue the great tradition of the nearly 30 year old Ridgerunner program, educating and engaging hikers on the Appalachian trail in Connecticut and Massachusetts. We all will be wearing some sweet Outdoor Research (OR) gear thanks to a generous donation. We are all living the dream out here on the AT! Hope to see you on the trail! 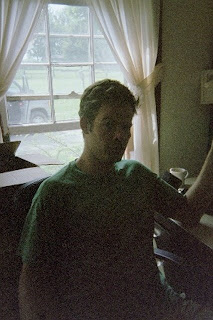 After months of plucking away at a keyboard I am excited that the field season is finally here! I have worked on pro trail crews on the Long Trail in Vermont, in the White Mountains of New Hampshire, and in Yosemite National Park. I look forward to sharing the skills I have honed over the years with my crew leaders and the teen volunteers, and hopefully sharing too the value I find in the work that has brought me back season after season. My first backcountry job was the Ridgerunner position that I now supervise, and it was a dream job for me. I hope I can facilitate for this year's Ridgerunners as great a summer as I enjoyed back in the day. 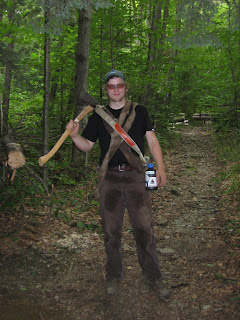 This will be my second year working for the AMC in the Berkshires. I was a trail crew leader last season and now I am working as the field coordinator, so I will be able to work with the other programs here which I am psyched about. I am from Great Barrington, so it is been a blast being able to help and work in my own "backyard" while exploring and seeing what the Berkshires have to offer. I am going to be a senior on exchange at the University of Montana in Missoula this next year where I will study Resource and wildlife conservation. I love to ski, backpack, and I am going to do my best to learn how to telemark and ww kayak. We'll see how those pan out, but in the mean time, I am enjoying the berks and excited about a great season. 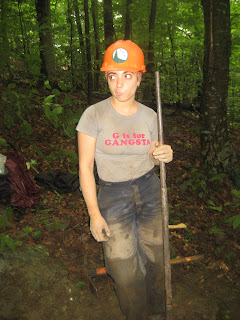 Born and raised in Framingham, MA, I got bitten by the travel bug shortly before college, and spent the next four years bouncing around a bit -- while getting my bachelor's in Math & French in Bryn Mawr, PA, I spent summers in Worcester MA, and Tucson AZ, as well as six months in Paris. I've always loved the great outdoors, working as a camp counselor every summer, but thanks to a few family hiking trips in the White Mtns and Berkshires, I knew I had to find a way to get out here again... This will be my first summer working with the AMC, and I couldn't be more excited! Along with traveling, reading, singing, learning languages, and meeting new people, hiking's one of my passions... and next year's goal is to hike the Alps. Hope to see you out on the trail! 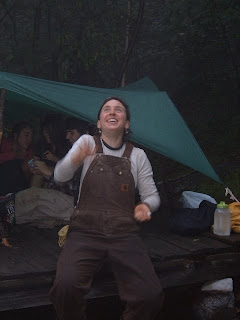 Well how do? My name is Tracey and I'll be arriving by way of Baltimore as one of seemingly few non- New England natives here. I've spent much time in the diverse piedmont plateau of the Chesapeake and have tromped through forests throughout the region. I was a Girl Scout for many years, some of which I also spent as a high adventure instructor. Par for the course, I love to backpack. Throw in a canoe or rocketing down trails on two wheels and I’m a happy clam. Partial to my heart are the Blue Ridge Mountains (when they’re not being blown up), bluegrass, and bare feet I'm looking forward to new mountains and new people, not to mention the chance to escape crowded buildings and the beltway. 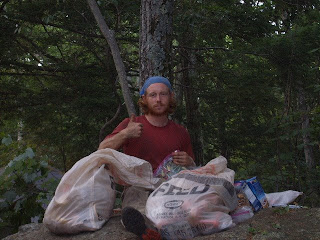 Hello everyone, I'm Brian, from Melrose, MA. I will be miraculously graduating this semester from Umass Amherst as an Economics major, with a minor in Latin American Studies. My big life adventure so far was going to South America last year to study abroad in Argentina, and then spending the summer traveling and hiking in Northern Argentina, Bolivia and Peru. Lately, I am most passionate about elaborate tuna salads, scrabble, microfinance, my sort of long hair, riding my bike and running around in the woods. This will be my first year as a trail crew leader and I am absolutely pumped to lead and learn and meet everyone. See you then! Hey, my name is John and I'm a junior at Frostburg State University in Maryland studying geosciences. When I'm not being a total geek, I enjoy backpacking, playing music, caving, and mountain biking. I'm really looking forward to spending my summer in New England for the first time and hope to meet lots of great people. See ya in the woods! Michael has lived many places, including a minuscule farming town in upstate New York, a ski village in Vermont, a trendy French city on the Mediterranean, the loft of a barn in the Jura, under a tarp in Utah, and amongst the redwoods of San Mateo county California, where a good part of his heart lies rolling in the duff. He hopes to communicate his love of nature through the AMC and is eager to discuss natural history with whomever has a willing ear, as it is his conviction that learning to appreciate the daily drama of a nettle plant is just as important as watching a herd of elephants on the Serengeti. In his spare time Michael enjoys playing the flute, writing, reading, drinking tea, and being presented with colorful boxes of scones by persons unknown to him. While he realizes that the possibility of this last being fulfilled via curious readers of his biography is quite small, he figures it's worth a shot. Nate returns to his post of Ridgerunner for a second season of glory. On the trail, you may identify him by his Grateful Dead wristband; off the trail by the enormous cup of Dunkin Donuts Iced coffee he carries with him. He's gotta be around the 3000 mile mark in his hiking career and he is the kind of guy who is just doing it because he loves it. He also has been slacking a little in getting his blog info to me.... 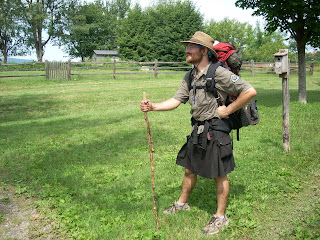