Hail to the Red Bench 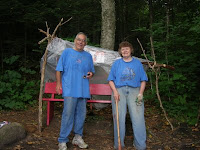 On August 16, 2008 Saturday Peggy Tucker and I sallied forth to repaint the Red Bench red. The Friday night we washed the bench in preparation for the repainting, dined at the Highland Center and spent the night in the Shapleigh bunkhouse. We had originally painted the bench in late July 1999 after we had adopted that trail. On that venture we had great sunshine and climbed Avalon while it dried. This day would prove to be different.

After procuring the paint for a hardware store in Bartlett, we advanced on our bench. The sun was shining, but we had hints of ‘occasional’ rain. Once there we prepared the bench but there had already been a moment of precipitation. We erected an impromptu shelter with fallen trees as poles, twine and a huge plastic sheet. We pre-painted the bench and went off to do trail work.

Then the heavens opened, thunder echoed across the mountains, and lightning lighted the sky. We hoped it would pass. Instead it began to hail. The covering partly worked and was readjusted. Hours later the sun returned and only huge puddles on the trails provided evidence of the hail storm and stones.

The Red Bench has a new coat of red paint.