Ah, what a week! The relatively easy life of “camping” at combined with working on Mt above treeline for days at a stretch in excellent weather with a GREAT crew. Of course it didn’t start out that way, with respect to the weather that is. After a quiet first night getting to know each other, there was a bit of disappointment with the forecast come Monday morning….nasty weather predicted. So off we went to Jefferson Notch and some bog bridge work on the Caps Ridge Trail. Our capable crew installed a good 8 bog bridges if memory serves me right thanks to some fine saw work (including impromptu touching up of the saw by Bill)

Fortunately the nasty weather held off till Monday night and we didn’t have bad weather to contend with out there. 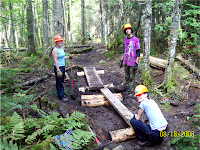 Monday evening was an eye opener for our leaders, Hammy and Jim, as some of the volunteers, with Bill in lead, stepped in to help out with dinner prep. A different chicken entree was served 3 evenings in a row, with no complaints from the crew as each was delicious in it’s own right! Check out the kitchen crew in action…..

When Anya returned at the end of the week to reclaim her kitchen, she had no complaints other than that it took her awhile to find where we put some of her stuff. 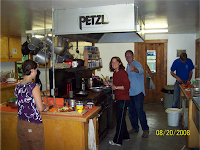 Oh yeah, the work. Meanwhile with the weather clearing out Tuesday AM we set to work on and scree walls on the Nelson Crag Trail. After some lessons on the fine art of cairn building from Hammy and Jim the crew set to work, with an occasional interruption to take in the magnificent view.

Frankly, I lost track of the count of we rebuilt and scree walls installed, but it was plenty, believe me! I believe everyone on the crew now has a cairn up there on 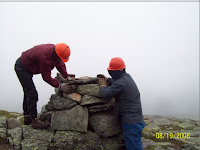 Mt that will be there a good long time because of their hard work and persistence in getting rocks off the mountain to sit together solidly as they must for a cairn to survive the harsh conditions.

We had a wonderful week working together, made some real trail improvements for hikers in the and had a fun time of it to boot! 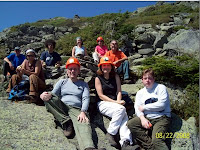 Many thanks to our Base Camp Crew on Mt :