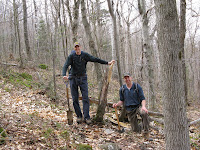 Time for my adopted trail to get some attention! So on sort of a gray day, my friend Rod and nephews Ross and Todd headed to the Mahoosuc Trail from opposite ends. Rod and I went in from the Trident Col side, while Ross and Todd started on the summit of Mt. Hayes. Arriving at the trail from the Trident Col tentsite spur, we found that Mother Nature took out the sign over the winter with a well placed blowdown. I was very surprised to see the amount of small branches and tree tops down this year. Both crews cleaned drainages as we worked towards each other, and did some 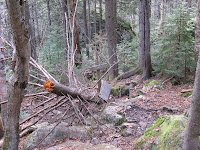 light trimming and hundreds of small blowdown removal. I like this trail because it has a large variety of conditions, from open hardwoods to softwoods, nice view points, ledge walking and a couple of scrambles. It also has nice seclusion, but not too far from a hot shower and a steak dinner!! Thanks to my trail volunteers over the past couple of years, Ross Caron, Todd Caron, Rod Levesque, Dave Leveille, and Gerry Patrick. We have put over 200 hours into this trail and it is much better shape that the beginning of 2007! 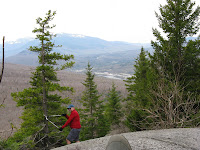