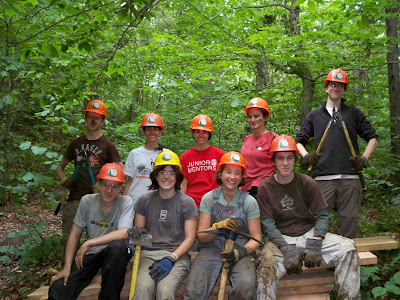 After four weeks of training last Sunday marked a momentous occasion for the Berkshire Teen Trail Crew Program…the arrival of teens! I personally was convinced that they were never coming, and was therefore pleasantly surprised when all but two of our nine participants arrived. I was even more surprised to note that they all seemed to be toting remarkably well packed backpacks and large smiles. I liked this crew already! Our week was to be spent on the side of largest summit, Mt Greylock, working on the overlook trail. Our main priority for the week was installing forty feet of bog bridging along with a long list of other fixes for the trail.

This being both Valerie’s and my first time leading trail crews I think we were mutually convinced that something was going to go wrong. However, due to a rockin’ crew and some good luck 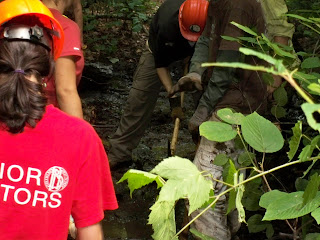 on our side we made it though the week without a hitch. Our biggest problem, (which depending on who you talk to could be considered a blessing) was a mass quantity of food. Down two participants we were already in for some trouble on the food front. Add in the fact that many of our participants weighed less than just one of the three bear bags we had stuffed full and you can begin to grasp the severity of the situation. After a few dinners where people were near explosion from trying to clean the pan we began to catch on to the fact that we really only needed about half of what we’d planned for. I am very proud (do I dare to say most?) of the amount of cheese we managed to consume this week. Despite much skepticism from staff and crew alike we ate 11.5 of our 12 original pounds. As a wise person once said “the only thing that cheese needs is more cheese!”

With our bellies full we managed to complete our five bog bridges, one water bar, two mini staircases, a check step, clear three drainages and brush in some braided trail spots. Not to mention we played an insane amount of a card game know as ERS, some hilarious rounds of a sheraids type game and had enough discussions about Napoleon and world history to make any professor proud. It was great to see everything finally come together and really beginningg to see what this program is all about. We could not have asked for a better crew for our first week and I am so grateful for all the hard work they put into the trail. All in all a great start to our summer! 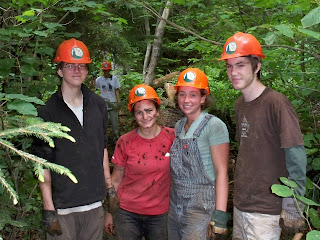