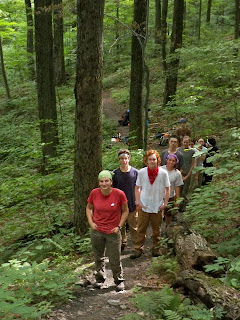 Week four of the trail crew has come and gone, and what a week it was. It marked the half way point in our summer and was the first of our two week stewardship crews. With a number of returning crew members and lots of experience the crew was ready to hit the trails Sunday in record time! Our main project was to begin a massive staircase on the Haley Farm Trail of Mt Greylock, one that will take multiple summers and crews to finish.

Due to the steepness of the trail and quarry area we decided to set up a high line system to safely move our rocks. Basically it’s a bunch of cables, attached to multiple trees, many feet in the air, and controlled by a grip hoist. 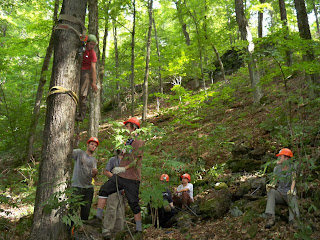 The idea being that the rock is raised into the air by the hoist and than slid along the cable to its end destination. Though they can be a bit time consuming to set up, once in place things become remarkably simpler than other rock moving methods. We spent a good part of Monday getting the high line ready to go and flew our first rock Tuesday morning to much excitement. Nothing like watching a huge boulder gliding through the air to get your week off and rolling!

Our next big excitement came Wednesday morning. Although I am happy to rise early as we do when on crew, I am not the most aware person at 6:30 in the morning. 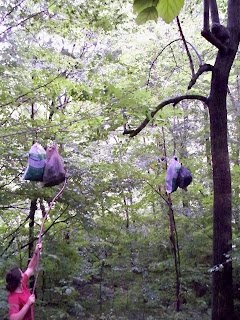 So as I made my way groggily to our bear hang tree, on an early morning quest for food, it took me a little bit to realize that something was different. As I looked up into the tree I saw a large object sitting on the nearest limb, and to complicate things it appeared to be alive. The creature was brown, a few feet tall, very fat, and unless my eyes deceived me it seemed to have quills. Yes that’s right, there was a porcupine in our bear hang tree, a very massive porcupine to be precise. Thinking I might be experiencing some sort of early morning, pre-caffeinated, hallucination, I went to get my co leader Valerie. She was able to confirm that I was indeed seeing the Godzilla of all porcupines sitting with its butt on the rope that held our food suspended in the air. Once confirmed there was then the matter of what to do with this prickly friend. Though there was some discretion about just how far porcupine quills could shoot, or if in fact they could shoot at all, no one seemed too keen on angering the creature. I am no animal expert, but it seemed like giving the porcupine rope burn on its butt, by lowering the food bags, might cause a little unhappiness in our friend. However, as tummies began to rumble we knew something had to be done. We eventually managed to move the rope enough by shaking it to convince the porcupine that there were better places to nap, and it scurried up the tree. 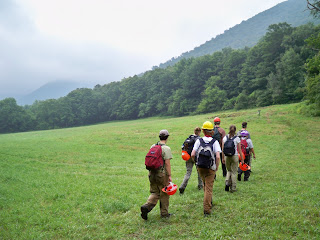 One porcupine, many flying rocks, a river swim, copious thunderstorms and a ridiculous amount of mac and cheese later the crew finished their fist week. They were given a little taste of civilization, i.e. showers, laundry, and a Bar-B-Q before being sent once more into the woods. This time it was for a weekend of leave no trace training and backpacking on the AT.

After an intense weekend of hiking, the crew 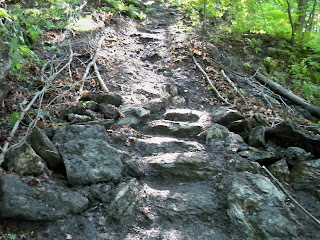 returned to Haley Farm to finish some solid work. Over the course of two weeks, our group put in 3 beautiful staircases, 4 waterbars, a crush pit, and a crazy amount of brushing. This was all completed, despite several setbacks – including finding ourselves in a shelter for a couple hours due to two massive thunderstorms. We had a phenomenal week, even considg food mishaps, mysterious trail workers, long hikes, and weather. And of course, what better way to end these two weeks, but a poker game – with starburst candy as chips! 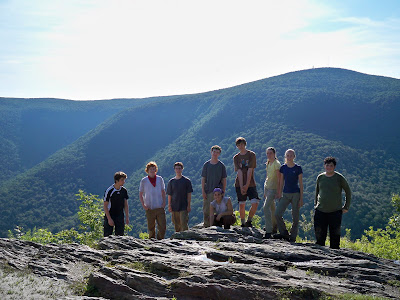 A stellar crew, with a go get’em attitude, these folks couldn’t have been more enthused about their volunteer work. We truly appreciate all of their efforts!