Small but mighty; that was the theme of our final Berkshire Teen Trail Crew of 2009. At the end of our last work day, four participants and two leaders looked from one another to the 16 stone steps, two waterbars, piles of brush and masses of crush we had made, marveling at how we could have gotten so much done with so few people. Really, there can be only one explanation: our crew rocked! Everyone was psyched to work, eager to help each other out, and totally respectful. Our positive mental attitude was through the roof, and we had a great time. It was the kind of week when the world seems to be on your side. The weather was beautiful, the bugs were negligible, and spirits were high.

On our first work day, we ran into some familiar faces. Poppins, the thru hiker who helped one of our crews make crush at Guilder Pond hiked by us on his way up Mr. Greylock and stopped to say hi. We also ran into another thru hiker named Ramble On, who had hung out with some of the other AMC ridgerunners and me back in . He was so appreciative of our work that he stopped to take a picture of us rolling rocks. Seeing their familiar faces was nice, and their sincere gratitude gave us incentive to keep working hard all week. 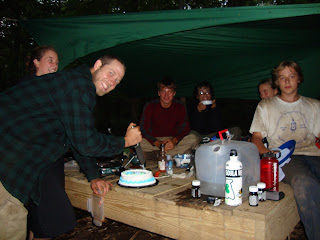 Of course, if you work hard, you’ve got to play hard, too. We had a lot of fun throughout the week. One day, some other AMC staff members brought in a cake for us, and we had a little end-of-season celebration. Another day, we drove our van to the summit of . Phil and I sang a lot, which was fun for us, but perhaps not as much fun for the participants who had to put up with our rather mediocre vocal skills. On our last night, our crew had enough leftover food from having four fewer participants than expected, that we were able to do some “trail magic” for the thru hikers at our campsite. We hooked them up with some hot dinner and provisions. The coolest activity, however, was definitely our hike to a nearby clearing, where we watched the sun set behind the mountains and ate copious amounts of Crunch bars.

After such a great week, it was hard to say goodbye. But fall is coming, school is calling, and it’s time to start preparing for another great year of Berkshire Teen Trail Crew. See you next summer!