Working under the capable leadership of Nick Scott, who was assisted by a volunteer crew leader, nine adult volunteers took up the challenge of helping a National Park Service Trail Crew re-construct a popular and well used trail located on Great Head just north of Sand Beach. The work involved crushing rocks with a sledge hammer to create a base, top coating with soil, clipping roots, brushing in a temporary trail and where necessary digging exit drains. The crew also highlined 125 large rocks from two quarry sites that would later be crushed for new trail base or used to build steps. The outcome was a real team effort.

The crew lived at Echo Lake near South West Harbor where The AMC maintains a family camp during the summer. A great location with a full kitchen, dining hall, library, wall tents on platforms with cots and most important, hot showers. For a trail crew, this is the life of luxury. The food met peoples needs but on Wednesday things got out of hand when we had four desserts. Fresh baked open face fruit cake, fresh baked banana bread, ice cream and some rice pudding made from the leftover rice from Tuesday. On another evening the group was treated to apple crisp prepared by the youngest member of the crew. Acadia is a good site to learn the basics of trail work complemented by great views and the food is not too bad either. 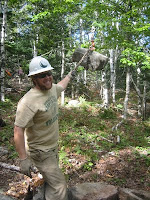 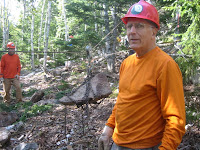 The start of each work session began with Nick leading the group in stretching (not to be confused with yoga) activities to get everyone prepared for a physically active work day. 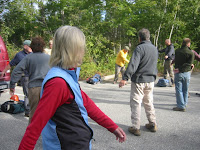 At the end of each work day, Nick would drive the crew to a different section of Mount Dessert Island. After all this was a work vacation.

Submitted by Bill Brodnitzki, AKA Grumpy