The first crew of 2010 included 8 great, hardworking volunteers. They showed up on Sunday and were not sure what to make of their very heavy packs and the giant sombrero that serves as the AMC driving hat. However, after a mile 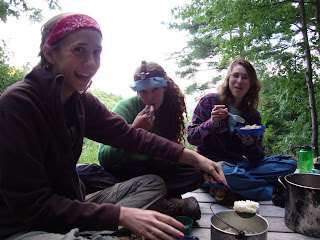 hike to our campsite, we were able to unload our heavy packs for the week and set up camp. A short, but intense downpour interrupted our efforts to get settled and sent us scrambling to the shelter, where we all crammed into the loft area (hoping to disturb other hikers as little as possible), played some ice breakers and learned how to spell pterodactyl. That was the last of the rain for the week, leaving only blue skies and cool breezes

After listening to Rachel and I talk for most of Sunday and a good part of Monday, the crew was ready to get to work. We quarried lots of rocks and started our numerous projects for the week. The crew quickly realized how hard trail work was and woke up a little stiff and sore Tuesday morning. That didn’t 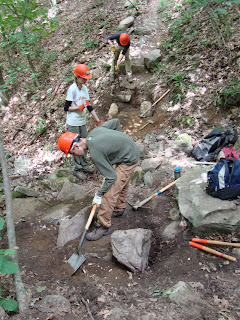 slow them down for the rest of the week though as they continued to work hard. During the week, the crew quickly realized the satisfaction, sweat, frustration and pride that can all result from trail work. We were lucky enough to have Tracey and Celia come out and lead our sidehilling efforts. (Tracey was also nice enough to pack us out a big, juicy watermelon to go along with our lunch on Tuesday.) By the end of the week, everyone on the crew were experts on their respective projects. Over the course of the week, we completed 5 rock steps, 20 feet of scree wall, over 14 feet of scree, 30 feet of sidehilling, 1 rock waterbar, 1 repaired waterbar and 1 ditch.

Our week didn’t consist of all work. There 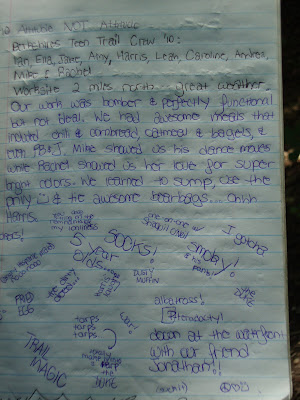 were plenty of jokes, riddles, laughs, and tripping over tent stakes. The Awesome Tape was of course a big hit and gave us something to look forward to during our van rides. We had contests to see who had the dirtiest shirt at the end of the week (probably a tie between everyone) and who smelled the worst (I won that one hands down). At the end of the week it was great to see the crew getting water, hanging bear bags and sumping their dish water like they had been doing it their whole lives. By Friday we were all more than ready for a shower, running water, and a soft bed. However, it was definitely a bittersweet day as we were sad to leave life on the trail, our projects and each other. The week ended with promised to stay in touch and to do a section hike of the trail next summer! 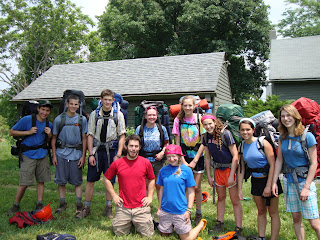