It has been another year of growth here at AMC's Berkshire Trails Office, and we have had all hands on deck hosting 36 teenagers from mid-July to mid-August on our two and three-week trail crews. This has meant epic-four-shopping-cart-grocery store trips, massive food repackaging operations, some tricky vehicle logistics, Fridays taxing our local laundromat's machines with dirty trail clothes, sweet cookouts, LNT backpacking trips, and a wonderful whirlwind of energetic crew members and staff throwing down to make it all happen.

When the season ends in a few short weeks, we'll have hosted 68 volunteer teens, ages 15-19, for 13 total weeks of back country trail crew, totaling nearly 4,000 hours volunteered to the Appalachian Trail, Mt Greylock Trails, and our local Fountain Pond Trail. This does not include the hundreds of hours of staff leadership.

So can you blame us for not updating the blog?

Here are some pictures from all this activity, dating back to early July to represent all the crews and all the great times and bomber work that we have been rocking here in the Berks. 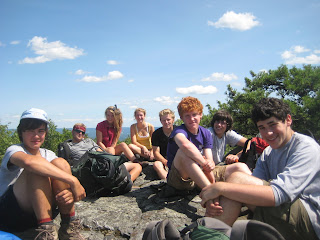 We've trained 36 teens on four crews as Leave No Trace Trainers. It is a two-day backpacking trip and a participant-driven curriculum. Participants each are assigned one of the seven LNT principles, which they teach to the group with a fifteen-minute presentation. They then get feedback from the group and instructors on how they did, in the trusty "compliment sandwich" format. These trips always yield good discussions, learning opportunities and team building. It is also a chance for crew members to learn about backpacking, and we've enjoyed some lovely weather on our mellow itinerary over Race Mountain and through Sage's Ravine. Above is our August 1-13 Stewardship Crew with three-year AMC Berkshire veteran Connor Young coming back for the weekend to lead, and below is our July 18-30 Stewardship Crew with Ridgerunner Daniel Griffith leading. 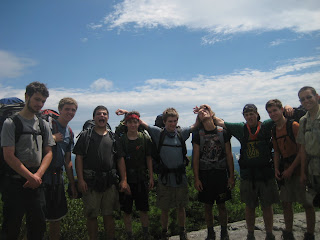 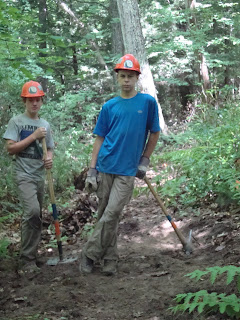 It is what we are here to do, and we have left a number of eroded sections of trail better than we found them. At Fountain Pond in Great Barrington, right, we made a final push, with the help of local youth organization Greenagers, to get this new two-mile trail fit to be open. We completed an impressive amount of sidehilling, set several bog bridges, using hand tools to peel and hew base logs, and traversed some muddy sections with rock steps. We also got some press from the Berkshire Eagle! This one week crew from July 11-16 also loved themselves some Mafia, the card game that is taking this program by storm, and brought some great spirit and work ethic to this important trail project.


From July 4-9, nine teenagers tackled the Appalachian Trail on Mt Algo in CT, on a steep and eroding section of trail. Here's a before and after; with no clear way to ascend, the area to the right (not pictured) was blown out, and the trail wide and ill-defined. So we stuck a little staircase in there, and thereby solved another problem. 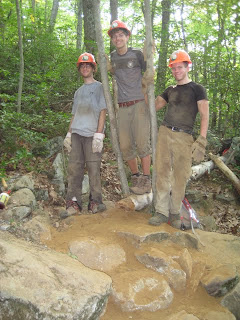 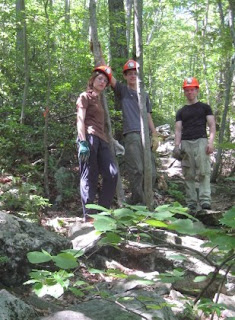 This crew worked on three staircases and a drainage in their productive week, and to hear it from "Marky Mark's" mom, had a lot of fun despite that heat wave that blasted us:

"My husband and I want to pass along some thanks to AMC for its teen trail crew program. Our son, Mark , really enjoyed his week on a Berkshire crew July 4-9. He said his trip leaders, Celia and Rachel, were "awesome." We are sure that they must be great, as Mark enjoyed the week despite the intense heat! Mark also noted that the food was "unusually good" and that his fellow teens were all hard workers and "very funny." I think he also found a lot of satisfaction in the physical labor and building steps and water bars.
We are very glad that AMC sponsors this program."

When we've had two multi-week crews out at once, we've had to find a way to get them showers, laundry, some down time, and some good food. So after some Friday morning laundry at the Laudromat and showers at Berkshire South Community Center (thank you, thank you!), the crews come back to our lovely home base at the Appalachian Trail Conservancy's Kellogg Conservation Center, known simply to us as the KCC. For the first one, on July 23, it was raining and the ATC was kind enough to open up the facility's Summer Room and Barn so that we could eat and pack inside. On the second, August 6, we had lovely weather and the crews played ultimate frisbee, had a crew tug-of-war that ended comically when our bear-bag rope snapped, and lounged in the sun. The sunny pictures will be forthcoming. 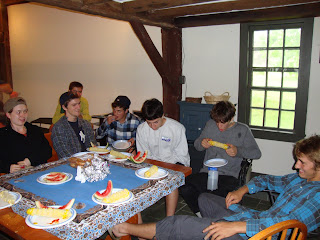 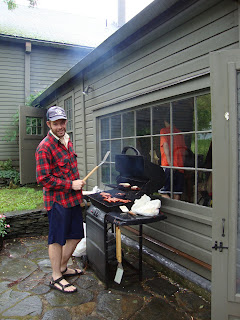 It has been rewarding to pull all this work off as part of a team. We've had the support of the Appalachian Trail Conservancy (housing, space and patience), Berkshire South Regional Community Center (showers and crew camping), Great Barrington Trails and Greenways (housing for Field Coordinator), Greenagers (labor at Fountain Pond), Berkshire Natural Resource Council (tools), Massachusetts Department of Conservation and Recreation (logistical support at Mt. Greylock, project supervision), the Monday Mountain Boys (tools, tents, stoves, equipment donation),and last but not least the AMC volunteer trails committees in the two states (tools, support, and advocacy).

Most of all though it has been the Berkshire Trails Staff that have banded together and consistently risen to the occasion with a positive attitude. They have given their sweat, labor, and heart to these projects and the teenage volunteers, and have been sterling role models, leaders, and team mates. Go over to our Berkshire Trails 2010 Staff page and see the updated staff and photos. 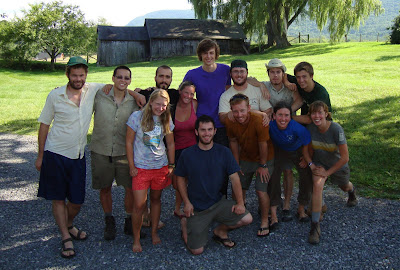 Just a few more weeks in this busy summer season. It has been a blast.