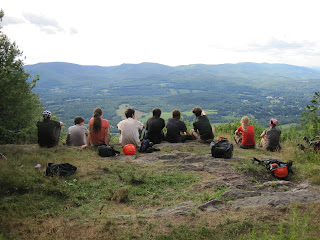 Two crews of teenagers spent the last weeks of July on the slopes and surrounding hills of Mt. Greylock, the highest peak in Massachusetts and an inspiration for authors such as Herman Melville and Henry David Thoreau. While one crew worked on repairing and building waterbars and staircases on the Gould Trail, the other tackled a relocation of the Appalachian Trail just north of Mt. Prospect.

The second crew endured a tough climb to and from the work site each day (on what is arguably the steepest section of the AT in Massachusetts), and volunteers learned first-hand about sustainable trail-building techniques as they stumbled down steep, highly eroded slopes. Alas, a beautiful viewpoint and the encouragement of thru-hikers who gazed longingly at the switchback in progress as they continued straight d 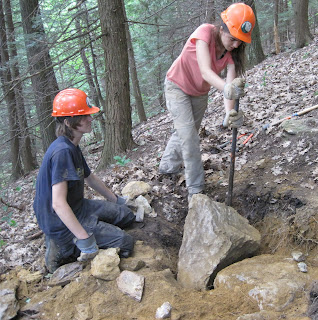 own the fall line kept spirits high.
The work was further enlivened by games of GHOST, the formation of a Russian lumberjack team to get through the many blowdowns across the relocation, and the sudden arrival of a thunderstorm that required the crew to go into a lightning drill (possibly the first ever in Berkshire Teen Trail Crew history!?).

When not brandishing rock bars and pick axes, volunteers helped to prepare delicious dinners (including a vegetarian Shepard's Pie and an inventive Asian Fusion dish) and learned how to hang bear bags and filter water. In their down time, the crews enjoyed countless games of Mafia, explored the monument on top of Greylock, spent a glorious afternoon swimming in the Green River, and went on a weekend Leave No Trace backpacking trip. 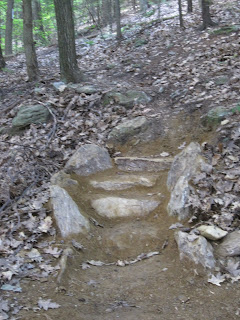