The seasonal rhythm of the world of the backcountry caretaker program goes like this: June we train the caretakers in a frenzied two weeks, covering everything from finance sheets to trail work to swinging an axe to composting human waste to a Leave No Trace trainer course. By July, the caretakers are all planted at their respective sites, and most of them have completed thei 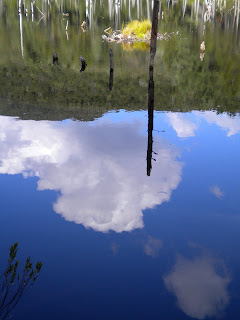 r first 11 day stints. By the time they’re in the second 11 day stint, it’s time to reinforce some of the information thrown at them in training with a site visit.

Throughout the month of July, all caretakers get an overnight visit from a senior staff (usually the Field Coordinator, who this year is Mike Foster), offering that in-person guidance. For a new caretaker, this is critical: by July, the memory of how to compost human waste is aged by weeks of distance, and two days of rockwork training suddenly seems insufficient when facing a rubbled and gullied trail, mattock and rockbar in hand.

It’s not enough for us as coordinators and managers to answer their questions when caretakers come out of the woods and track us down in the valley—the best learning is hands on in the field. With 12 caretakers (7 of which are first years) staffing 9 sites, this is a logistical challenge for sure. During a visit, the Field Coordinator will set the caretaker up with a trail work project, tell them that it is a bit early to think about emptying the composting outhouse, and share their own experience with visitors, both the glorious and the somewhat challenging.

August site visits are slightly different. When we visit in August, for that second site visit, we are there to assist, to gently guide, to work as a team with a caretaker to further refine the skills they’ve developed. By now, caretakers have settled into the routine of their site, and are experts in managing the area they have begun to call home. They skillfully arrange campers’ tents and tarps on crowded nights in a game we call “human tetris,” and send folks to particular platforms on quieter 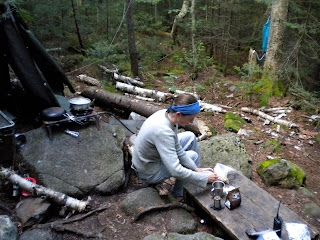 nights to promote solitude. They have transplanted trees and built small scree walls in the site in response to the human impacts they have seen occur. They have completed (or near completion) on multiple trailwork projects. They have filled their first composting bin, and track the temperatures as they rise to 130 degrees. They have figured out what food they want to bring with them to sustain them for 11 days in the woods. And, of course, they have found the spring with the best water, the spot with the best sunset, and have bushwhacked to the local trailless summit.

In other words, by August, the caretakers have developed their own identity. It takes a long time to figure out how to be a caretaker. It is highly personalized, and is the result of more than the two weeks of training. It requires that hands-on experience, that in-person experience, of moving rock by alone by hand and talking to an endless stream of hikers. It also requires a certain personality, a strong sense of self and a fierce work ethic. We give caretakers the technical skills, and we redirect them along the way, but ultimately a good caretaker comes from what each person brings to the position.

So how are these caretakers doing this August?

If any of you have been near Kinsman Pond shelter, you might have noticed a set of superb bog bridges on the Cascade Brook trail, built by our first year caretaker Tristan Eames. Tristan has also excelled in outhouse management, which is important because he is responsible for the nearby Eliza Brook shelter in addition to Kinsman.

Next is Liberty Springs tentsite, staffed by third year Richard Ahlf. Richard is unique in that he has requested to work at Liberty, and only at Liberty, for the three years he has worked for the program. He thrives in visitor interaction, and takes great care of the campsite. This year, his main project has been removing the railings throughout the site and replacing them with less obtrusive scree walls. This will achieve the dual purpose of making a more rustic place to visit, while still ensuring that the fragile revegetation areas are given the opportunity to recover.

Over in the area of Garfield Ridge, two of our second year rotator caretakers, Matthew Hickey and Garrett Gorenski, are bravely tackling the reconstruction of the , one giant rock at a time. They work together on this trail when, every other week, Matthew is at 13 Falls and Garrett is at for three to four days. In addition to their technical skill, both are friendly faces for many hikers: Matthew possessing a compassionate bedside manner dur 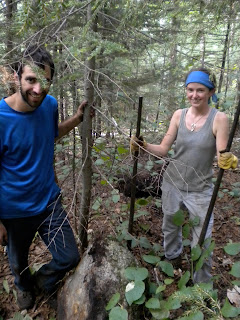 ing medical emergencies and Garrett offering a thoughtful “quote of the day” posted alongside his weather reports.

Garfield Ridge and 13 Falls, being so close together, lend themselves to team caretaker projects. None of the other AMC sites are as close together. Eli Liebermann and Steph Kelliher, both first years, coordinate over the radio in the morning their work for the day: packing bark to 13 Falls from Galehead Hut (used in the composting process, and due to the location in a Wilderness area, we have to use human transport rather than helicopters), bushwhacking through the Wilderness, or working on their trail project on Franconia Brook. When I visited them, I helped them quarry a series of rocks that they will turn into a staircase and a waterbar.

Guyot is our most remote backcountry site. It is rugged in approach and high in elevation. We rarely staff it with a first year, but Ian Fitzmorris has proven more than capable to handle the challenges of the site. He has accomplished incredible revegetation and rehabilitation w 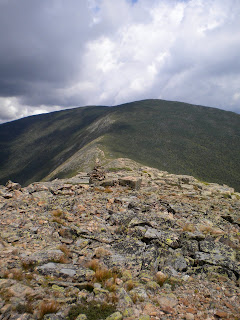 ork within the campsite, as well as impressively structurally sound on Bondcliff. He has taken initiative with signage within the campsite, paying close attention to hiker behavior. Displaying a dedication to wilderness living, Ian views every sunset from West Bond and prefers to descend to the area of 13 Falls via bushwhack. Where Ian really excels is when, at the end of his long work day, he displays an extraordinary amount of patience in managing a campsite that is brimming nightly with hikers, camp groups, and their four legged companions.

Ethan Pond is a campsite that has been staffed irregularly this summer, due to injury and then substitution. We are psyched that Ryan Wilford, a third year, has returned to us mid-season to staff Ethan. With the technical skill he is known for, Ryan, working with Mike Foster our Field Coordinator, has been working on a significant improvement to Ethan’s cooking area. What was once a muddy sloppy pit is becoming a dry and stable surface, complete with what Mike describes as a “love seat” sized be 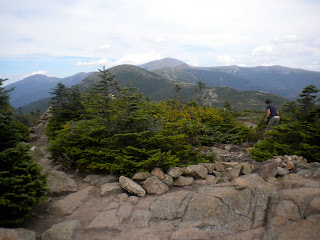 Continuing East, the next site, Nauman, staffed by first year Sharon Hannigan, has been home to some superb visitor education on alpine plants. has also worked with the Mizpah hut crew to further awareness on alpine stewardship efforts, as well as build moderate scree walls on the northern side of Mt Pierce.

Imp campsite is one of those quiet sites, with moderate to low hiker use, distanced from the crowds of and the Pemi, and, as a result, it is staffed by a quieter caretaker. Scott Bockus, a first year, is the quintessential Imp caretaker, who has been quietly performing all aspects of his job: he has done his composting, he is almost done with a staircase, and he hands in his paperwork on time.

Speck Pond is the second most remote campsite, not only because of the hiking trail but because it is accessed via a 9 mile rutted and potholed logging road. Steve Frens, a second year, is about to put the finishing touches on a staircase on the . He has grown familiar with the use patterns of Speck, seeing locals coming up from Grafton Notch as well as groups struggling in late through Mahoosuc Notch and over the Arm. A huge perk of Speck? This summer weather has been superb for swimming in the best Pond of all the campsites.

Starting on September 6, we will start to close 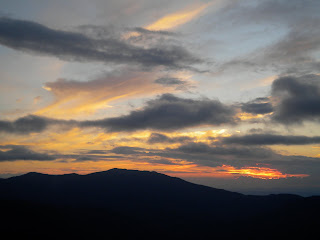 down the campsites as the summer crowds wane. This means, for caretakers, that it is time to button up their trail projects and to think about that last composting bin. And, also, what site they’d like to work at next year.