Timberland to Public Land: A story of Success 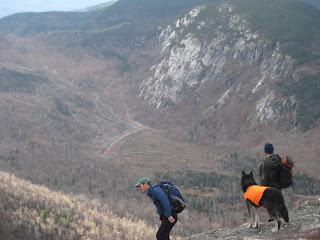 This past fall, a big thing happened in the unincorporated township of Success, NH: 4,770 acres passed quietly from private ownership to public land in the Mahoosuc Range in New Hampshire. These 4,770 acres have expanded the trail corridor held by the National Park Service for the Appalachian Trail, and will be managed by the White Mountain National Forest.

It was relatively easy to miss this transaction, occurring electronically between private timberowner T.R. Dillon and the National Park Service. Soon after the transaction was complete, and the deal was closed, word hit the transom and a wide array of partners celebrated the success of Success.

This quiet transaction was the culmination of years of collaboration between community leaders and politicians, local recreational clubs, conservation nonprofits, as well as various staff and volunteers from the Appalachian Mountain Club. Through these conversations, a three-phase land conservation strategy was developed by the Conservation Fund. The first phase is these 4,770 acres, funded through the Land and Water Conservation Fund. It will protect a stunning viewshed, the Success and Carlo Col trails, and the summits of Bald Cap, North Bald Cap, and The Outlook.

As this land shifts into public ownership, a further collaboration is taking shape between the Appalachian Mountain Club, the Appalachian Trail Conservancy, and the White Mountain National Forest to develop a stewardship and management strategy for these lands. The reality of a tract of land managed for timber is a backlog of stewardship: cataloguing of historic sites such as logging camps, identification of significant watersheds and fragile environments, road closures, parking areas and signage, and trail rehabilitation and reconstruction.

The AMC conservation department has contributed significantly to this project, both on the ground in the woods, on the pavement in local communities, and in the halls of politics, and will continue to do so as we move forward into the next phases with the Forest Legacy Program and the stewardship of the 4,770 acres of brand new public land.

Of course, here at the Trails Department, we celebrated the transaction with a hiking tour of the parcel in November, climbing to the Outlook on the Success Trail and along the icy ridgeline to descend by the Carlo Col Trail. For the three of us, myself, Trails Supervisor Dave Salisbury, and the ATC’ New England Regional Director Hawk Metheny, we had hiked those trails countless times, but never as public land. What does it feel like? It feels like the promise of stewardship and the preservation of a bloc of Mahoosuc rugged beauty. There are no words.

For more information on this transaction, read the press release from the Conservation Fund, as well as an article on contemporary conservation techniques and strategies for industrial timberland in the current issue of Appalachia. For those on the Trails Committee, we will be at the AMC's Annual Meeting on Saturday to provide more information on the project and the future.