From Guyot to Grafton: The first month of a caretaker season 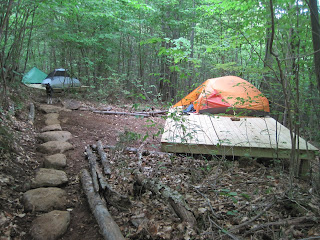 It’s amazing how fast a month can fly by in the Whites. In what felt like a few short days, I have managed to work two full stints in the woods, help construct a new campsite on the Grafton Loop Trail and lend a hand training first years in basic trail maintenance and rockwork. My first stint of the year was at Guyot campsite. The permanent caretaker Ian was still abroad so I filled in for ten days before starting my rotation. Early June is an amazing time to be amongst the Bonds. The crowds and high temperatures of midsummer had not yet set in and the high peaks of the Pemigewasset were therefore, quite empty and cold. This combined affect satisfied both my Scandinavian blood and desire for a “wilderness” experience as described by the Waterman’s. I even managed to bag my first composting run of the season.

After Guyot I was fortunate enough to be able to help our Field Coordinator Beau, Mahoosuc Rover Ryan and Imp Caretaker Matthew work on the new Bald Mountain Campsite. By the time I arrived, the three aforementioned and various other second year caretakers had already built the platforms and privy. All that was left to do was move some rocks around. While Beau and Ryan started on a water bar and staircase, Matthew and I went to work shoring up a bank where the campsite spur trail crossed a stream. It is amazing how quickly this area is eroding even with the limited use received from the construction crew. It was obvious a large rock was going to be needed to get the job done right. Matthew took this to heart and selected one of the largest rocks I have ever seen used in trail work. A “refrigerator” rock was the term we used to describe it. After several hours of hard work and the construction of an ingenious cribbing system rigged up by Matthew, we were able to dry set the rock on ledge. The protection it affords the stream bank is incredible and surely there will be no trail erosion for decades to come. When my boss Sally Manikian saw the rock, she remarked how every caretaker has a particular piece of trail work that they look back upon with pride. This rock will surely be my piece.

After Bald Mountain I began my east rotation with a trip to Speck Pond. I had been in the Mahoosucs once before during my first year training but I did not have much opportunity to explore. I was blown away with their beauty. Speck pond is located in this unbelievable bowl between the Machoosuc Arm (north of the Machoosuc Notch) and Old Speck Mountain (south of Grafton Notch). The water is crystal clear and although the temperatures were too cold during my brief tenure there, I look forward to future swimming sessions. I spent the majority of my first stint at Speck exploring the trails between Grafton Notch and Full Goose Campsite. Frequently hikers will ask for trail descriptions around the staffed campsites and it’s important for the Caretaker to be able to deliver first hand knowledge. The second leg of my east rotation consisted of a stop at Imp Campsite, another lesser-known gem in the Carter/Moriah Range east of the Presidential range. The long term weather forecast looks good and I can’t wait to get back out there.