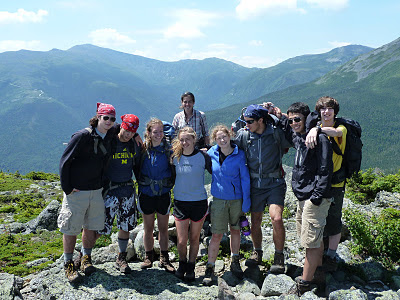 Eric Nieminen
I started the Leadership Crew without much outdoors experience and I had never done a trail crew before. I had no idea what I was getting into; I was truly jumping into the fire. The bugs were in full force the first week, heat the second, rain the third, and mud the last. While learning to deal with these White Mountain trademarks, I enjoyed being part of about the vast variety of quality work that is done by the AMC to make the trails passable by visitors. The experience I had in this program is incredibly valuable for anyone who wishes to pursue opportunities in conservation because of the field-work skills we learn and the connections that we develop with leaders - who are awesome.


Laura Burnham
To say that the Leadership Crew had learned and accomplished a lot in those four weeks would be an understatement. Through Wilderness First Aid, Leave no Trace, and CPR certifications, not to mention four weeks of trail work or the work we did in the garden, tool shed, or kitchen, we achieved a lot. It is the only group of people I know who can work for hours covered in mud trying to set a rock and still have a great time doing it. Highlights of the trip would definitely include swimming at Emerald, sleeping under the stars, rock climbing, barbeques and Ethan’s food in general. It was quite the four weeks to say the least. At the end, no one wanted to go home but after a month I know that the friends I made will remain close, continue hang out, go to concerts, and remain in contact. And that’s just the way she goes.


Allison Cluett
As soon as I heard about the Leadership Crew, I knew it was how I wanted to spend my summer. Arriving at Camp Dodge, I had a faint idea of what to expect, but my experiences this summer exceeded all of my preconceived notions. Over the course of four weeks, we learned the frustratingly satisfying ways of rock work, how to make delicious food in the backcountry, and the basics of Leave No Trace and Wilderness First Aid, among many other things. The work, while challenging, was extremely rewarding; rarely do you have the chance to create such lasting things that you could visit years later and say, “I helped build that!” I certainly have a newfound appreciation for the trails I hike, aware of how much labor went into their creation and maintenance. However, the highlight of my summer by far was meeting all of the amazing people on my crew and at Camp Dodge. Never before have I been a part of a group so enthusiastic and willing to camp, hike, and work despite rain, bugs, heat, and mud. So when I finally re-entered the “front country”, I was not without new friends, increased confidence and skills, and myriad stories of my time in the woods.

Greg Allen
For most volunteers who get the “Dodge Experience,” food just sort of “happens” on Monday morning. It arrives in heaping boxes, in perfect proportions, and in time to leave later that morning. Before my Leadership crew experience, I was no more enlightened. However, four weeks richer, I can tell you how much rice a crew of ten requires (3 lbs.), what bread product works best for lunch (always wraps, never bagels), how many snacks to rec (3 per person per day), how long yogurt lasts in the backcountry (one day, no longer), they key to making Annie’s (add butter), how to get all the special recs you want (draw Storehouse a great picture), and how many special recs Dodge really gets (actually, I never figured that out). Helping to write the rec for TLC (as we came to be known) was a true microcosm of the greater goals of the leadership program: we were forced to make key decisions, account for the opinion of the group, problem solve, delegate, be organized, be efficient, be courteous, and be accurate, all with a high degree of independence and limited supervision. And of course, we did massive amounts of trail work, got trail names, made inside jokes, made s’mores, lamped when when should have been working, worked to make up for lamping, pulled weeds, ate as much of Ethan’s food as we possibly could, and I got a haircut (because who doesn’t look good with a Mohawk?). Not bad for four weeks, right?


Elise Goplerud
When I tried to explain what my summer plans were to my friends they looked at me in awe. They were shocked by the hard labor, lack of showers, and lifestyle I would be following for four weeks straight. But the aspects that some people would never want are what made the Leadership Crew so special. It’s rare in life that you will be able to do something as intense as spend four weeks in the wilderness and find seven other people your age that are right there with you. Instead of grabbing latte’s and cappuccino’s we ate Soy Ginger Tempeh cooked on a gas stove. Instead of tanning on the beach with my friends I came to Camp Dodge to move gigantic rocks with a group of strangers that would turn out to be some of my best friends. We pushed ourselves to the limit and tested our mental capacities to the fullest. Some might describe the four weeks our crew spent in the woods as crazy but I call it the “dankins” (best) four weeks of my summer.

Patrick Chastant
How did I spend my summer? Well it was at Camp Dodge with the AMC doing trail work for several weeks. Some of my friends were astonished and some of them didn’t believe me when I told them this. Then I was asked if I would do it again, and the answer is HELL YES I WOULD DO IT AGAIN! Not only did I get to make new friends from all over New England I also got to know them better than people that I have a class with. Everyone got along with each other so well, of course there was once in a while were someone was crabby but hey u spend a few days in the rain where you get cold and slightly dehydrated. We got such an enormous amount of work done because we knew what was going on and by the end of the 3rd week we knew how to do everything. I’m going to try to keep in contact with all of these new found friends as well as try and get together with them once in a while. For these are all great people and I would love to do this again.

Avery Meyer
"Like many other members of the Leadership Crew, I arrived at Camp Dodge at a time when some of my biggest life decisions lay just a few steps ahead of me. What do I want do do with my life? Is my major right for me? Is what I'm doing worth while? Camp dodge provided a breadth of fresh air in a way that no other place could. It gave me the chance to focus on simply "living." What I mean is that I could think about the here and now while appreciating the world for what it could be. And it showed me that there was more than one way to not live a stressful life. I may like stress, and be quite good at not worrying about it, but that isn't the same as being completely relaxed. Sure there were difficult moments; when a rock wouldn't fit right, or if a boulder refused to move; but it wouldn't have been interesting without them. And as always, I learned from overcoming each obstacle.

Throughout our four weeks together, there was a running joke about silly hypothetical phrases we could use to describe camp dodge on t-shirts. For example: CAMP DODGE: CONSERVATION THROUGH DESTRUCTION or CAMP DODGE: LEAVE NO TREES. Both of these phrases point towards one idea. Camp Dodge is a place where those of us who have had the misfortune to grow up, can be a kid just one last time. Because who doesn't want to roll rocks, jump in mud, and hit trees with sharp objects. You know you do too."

Joe Murad
I spent this summer doing the AMC’s Leadership Crew -- it was great! I learned so much. We did wilderness first aid training, we learned about Leave No Trace, we went rock climbing, we went swimming – and that was just on the weekends. During the weeks we did trail work and lots of it. We learned how to build log bridges, stone water bars, stone staircases and so much more. We carried all the tools and food we needed for a week in the woods on our backs (that’s a lot of weight) but it was always fun. Yes, it was hard work but everyone was always in the best mood -- you couldn’t help but be happy. Overall it was the best summer I’ve ever had.