Garfield Ridge Shelter: The story behind the flagship (with slideshow) 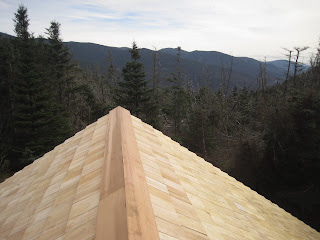 Ladies and Gentlemen, Boys and Girls, may I have your attention please.

I bring before you now the flagship of the AMC Backcountry Shelters. Assembled of white pine, capped with cedar, and accomplished through partnership with the US Forest Service with funding from the Appalachian Trail Park Office, the new Garfield Ridge Shelter sits unveiled, in all its glory.

What is the story behind this project that was a year in planning and a brief few weeks in executing? What of the artisan timberframers, professional resource managers, and strong backed crewmembers who made it all happen? If I could have your attention for a bit longer, I’ll tell the story.

It starts with those initial field visits in the summer of 2010, taking pictures and measuring structural rot, all with the eye towards determining whether the old shelter required replacement or repair. And, moreover, if it was to be replaced, what kind of shelter would it be? Would it be dimensional lumber? Native timbers from the site itself? Or, maybe, of the class of shelter as Eliza Brook (2010) and Kinsman Pond (2007)?

Through discussions over the winter with our partners the US Forest Service and the Appalachian Trail Conservancy and the Regional Planning Committee, we decided first on replacement of the shelter and then on the design: pre-constructed by John Nininger’s Wooden House Company. (For more information on John’s work with AMC on Eliza Brook Shelter in 2010, please click here). Working with John during the late winter and spring, we fine-tuned our design for the new Garfield: not too tall, not too long, and not too exposed to the elements by a completely open door.

Work on the new Shelter began at John’s lumber yard in August, with the arrival of a series of 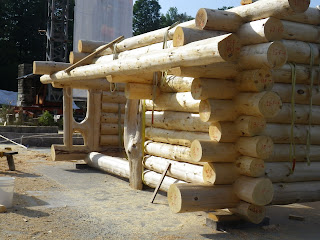 unpeeled white pine logs that John had selected and marked himself. From there, he (and crewman Mark McCulluch) spent three weeks peeling, scribing, notching, and then assembling the structure. In August John unveiled the artistic touches that would be the defining features of the shelter: a wide curved branched log and an “h” shaped joined log (that is ONE LOG folks!). Put simply, John is the best out there.

We at AMC were responsible for everything else: the foundation, the floor, and the roof. The foundation and the floor had to be set before the shelter could be raised, and old shelter had to be demolished before the foundation could be set. We had a lot of work to do. However, due to the challenges posed by Hurricane Irene, the preparation of the site of the new shelter was delayed and ended up being a frenzy of dawn to dusk workdays in the week from September 14 to 21.

The unstoppable rhythm of that single week ran like this: two days of demolition, one day of 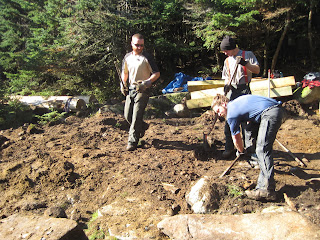 ground leveling, one day spent setting ten 8"x8"x4’ piers three feet in the ground, one day of setting the sill logs and building the floor system, one day of site preparation for airlift, and one day of the shelter raising itself.

In other words, our scrappy tough crew of caretakers and their field supervisors accomplished two weeks of work in six days. Luck was on our side with some things (in setting the 8x8 piers the crew did not encounter massive boulders or ledge) but not so with others (building the floor system took longer than anticipated). With a crew that varied from three to five people, the work got done through frosty mornings, sleety afternoons, and a few gloriously sunny days.

While the crew was hard at work in the high mountains, down in the valley materials started accumulating at the airlift site, building towards a crescendo: cut and measured lumber for the loft and ridgecap, piles of shingles, lengths of tongue and groove spruce, and the tractor trailer that held the logs of the new shelter. And, of course, a dumpster as the final resting place of the old shelter.

On September 21, a day that dawned bright and clear, a crew of helicopter pilots, AMC staff, and John and Mark, gathered for the raising of Garfield Ridge Shelter. The moment had arrived. 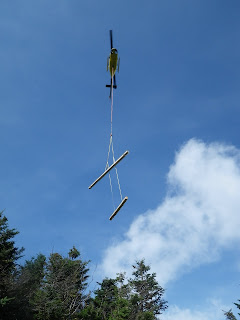 It is John who speaks in the somewhat antiquated language of timberframing, of summer beams and purlins and rise and run and the raising of the shelter itself. At the end of the day, we were all speaking in the language of timber framing, as each beam came in we noted its placement in the shelter. It was a momentous day in the backcountry.

The shelter came in two logs at a time, with the weights varying between 200 to 400 pounds. The skill of the pilot, combined with the craftsmanship of the logs, meant that each log could be placed directly into the notch by the ship itself. A few taps with a sledgehammer, with some coaxing from a flatbar, nudged them firmly into place.

While assembled piece by piece, log by log, one must resist calling the new Garfield Ridge Shelter a “Lincoln log” construction. The reason being that, instead of a pre-fabricated every-stick-is-milled-exactly-like-the-stick-above (and thereby requiring 18” spikes to hold the thing together) each piece of white pine is carved individually by hand to meet the log above. The method of the full-scribe Swedish cope ensures that the logs, as they settle, 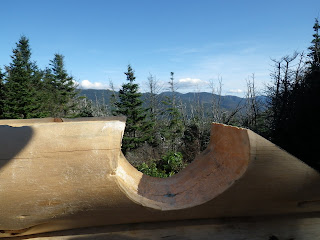 settle into one another and do not have any gaps. The intricate notches of John’s are strong and stable, often both curved and straight at the same time.

There are no spikes in the entirety of Garfield Ridge Shelter. There are, however, four pieces of threaded rod that are tightened annually to pull the logs closer together as they shrink, to prevent gaps. These ensure a seamless appearance, and hold the gables fast to the rest of the structure.

Back to the momentous day. The raising began at 10 or so, and the final beam, the long ridgepole, came in at 3:30 p.m. John and Mark scurried up high on the ridgelines like the professional timberframers they are, affixing smaller wedges of wood and running the long threaded rods through. By 4 p.m., the shelter was raised, and we toasted the new flagship before watching the sun set from the summit of Garfield. 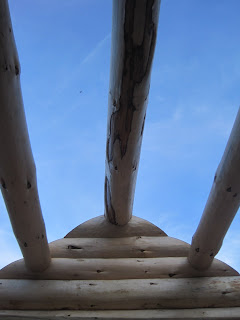 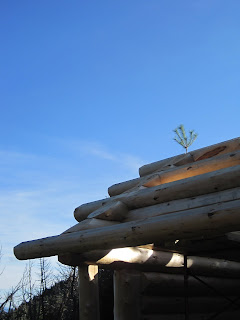 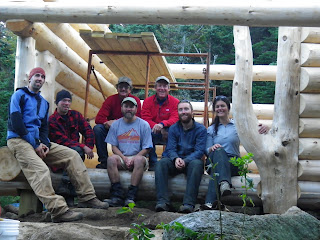 After that rush of adrenaline, the recognition that we had removed and replaced an entire building in the backcountry in seven days, we settled in for the exacting and painstaking work of roofing: sheathing, shingling, capping. 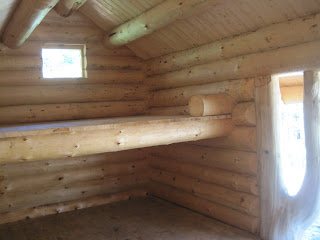 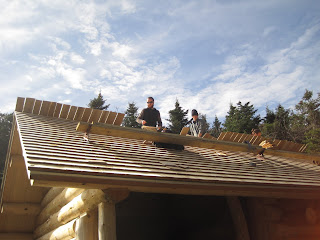 Garfield Ridge Shelter gets bombarded by weather. It is exposed, high elevation, and also high use by visitors. In fact, the roof of the old shelter blew off one the winter in the early 1990s. We went with a rock solid roofing technique: 2”x6” tongue and groove spruce, thick clear cedar shakes, and capped by waterproof material (ice and water shield) and a clear cedar ridgecap. 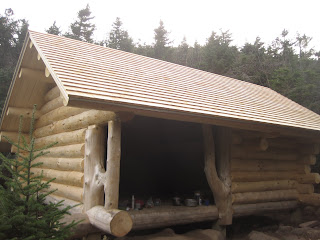 The new shelter is done, and our flagship site (visited by over 2,000 people overnight from late May to October 2011) has a shelter (indeed, a work of art) that suits its needs. 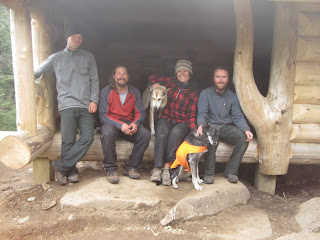