Over the summer of 2011 the AMC’s Professional Trail Crew worked on the Falling Waters Trail in Franconia Notch thanks to a Matching Awards Program Grant from the National Forest Foundation. They spent 9 weeks installing structures to mitigate serious erosion and provide trail definition and enhanced safety for hikers on the very popular trail. 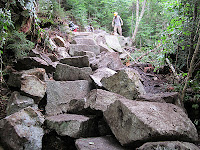 The Falling Waters Trail is located in the scenic Franconia Notch leading from the Parkway, I-93, to the summit of Little Haystack Mountain. The trail passes many attractive waterfalls, crossing brooks six times, and climbs 2800 feet in 3 miles to treeline. It is part of one of the most popular day hikes in the White Mountain. Together with the Franconia Ridge Trail (part of the Appalachian Trail), Greenleaf Trail, and the Old Bridle Path the 8.6 mile loop is a must do for many hikers. This classic hike, and easy drive for millions, climbs to the crest of the Franconia Ridge, traverses the ridge, all above treeline, reaches the summit of Mount Lafayette, the sixth highest peak in the White Mountains, and passes AMC’s Greenleaf Hut. Its waterfalls, high peaks, alpine areas and stunning views attract thousands during all seasons.

Due to the extremely high use, steep terrain and rough weather, the trail has suffered serious erosion and widening. To mitigate this and prevent further degradation, the AMC’s professional trail crew installed and repaired rock steps, drainage structures, scree walls, cut steps in ledges, and improved stream crossings. The trail corridor was also brushed out, defined with rubble and debris to close unwanted travel off trail, and remarked with blazes and updated signs. The work was performed within our financial goals.

The primary goals and objectives of this project were to mitigate trail erosion, improve brook crossings, enhance hiker safety and rehabilitate the trail tread on the Falling Waters Trail. The Falling Waters Trail is one of the most popular hiking trails on the White Mountain National Forest (WMNF) and the extreme popularity of the trail had lead to above average trail degradation through the fragile ecosystems this trail passes through which include northern hardwood, spruce/fir forest, and riparian ecosystems. The purpose to the work funded through this grant was to create new trail structures, and improve existing ones, to mitigate the accelerated rate of soil erosion due to the high density of hikers. For almost a century, the heavy hiker use combined with heavy annual precipitation has severely eroded sections of the trail tread. In many sections of the Falling Waters Trail, hikers also veer off trail, behavior that damages flora as well as further accelerating trail erosion. 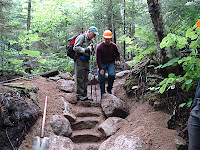 The physical work objectives of the project included hardening and defining the eroded trail tread by constructing and repairing native stone steps and adjoining scree walls. Rock water bars, check dams, ditches and other erosion control structures, which have proven their success over decades of use along the Northeast’s trail system, were constructed to control the flow of water to prevent further erosion. Additionally, as the work was done on one of the most popular hiking trails in the WMNF, the work provided a unique and valuable opportunity to educate the thousands of hikers who use the trail annually. Through the project, the general hiking public was able to see first-hand the actual work and care necessary to limiting hiker impacts. The trail crews often draw interest, as well as words of gratitude, from passing hikers. By performing this restoration work in such a highly impacted and visible area, the AMC’s professional trail crews were able to provide an implicit demonstration of trail and alpine stewardship at work. These goals were all met. 2,412 hours of trail work was done on the trail to mitigate the current state of erosion and to prevent further damage to the fragile ecosystems. The hiking public received a nearly immediate benefit from the work as the trail became more and more stable under their feet, as well as the intangible benefit gained from the feet-on education of hiking in the area while the project was underway.

The tangible outcomes of this project were the fruits of the 2,412 hours of trail work done by trail crews of 4-7 people from June 13, 2012 until August 19, 2012. Each week, the trail crews submitted a report of the work they did: 153 rock steps were installed, 7 rock check steps, 7 step stones, 661 feet of screewall, 2 large stream crossing were cleared of logs and debris, 9 steps cut and chiseled into ledges, 5,000 feet of brush cut out of the trail corridor, and 300 feet of side trails were brushed in and closed.

In terms of success, the project results speak for themselves and were shared with the surrounding community through osmosis. The nature of this project—mitigating current and preventing further damage to the trail—makes it somewhat difficult to both ascertain the full effect of the work and to fully publicize the true extent of the work.

The major challenge of this project related to the extreme popularity of the trail. The Falling Waters Trail remained open over the course of the project and as safety remains a high priority in all aspects of AMC’s trail work, it was necessary to plan and prepare the site for the many users of the trail, even as potentially dangerous and certainly technical aspects of the project were underway. We addressed this by placing spotters above and below the work site to alert and educate hikers about the situation they were walking into. Also, it was challenging to determine the best possible treadway and level of improvements necessary for the trail. The sheer number of hikers attracts a largely novice hiking crowd, who, being less confident in their footing along the trail require the trail being built to a lesser level of difficulty than would be necessary if catering predominantly to more experienced hikers.