Regards, Resolution: The removal of a shelter in the Dry River Wilderness 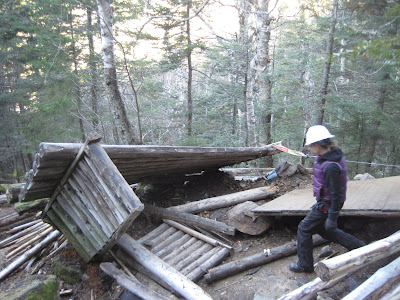 On December 1, 2011, staff from the US Forest Service Saco Ranger District and the AMC trails department gathered in partnership for the dismantling of Resolution Shelter, in the Dry River Wilderness.

The decision to remove a shelter is a cautious and thorough process, lengthy with evaluation of historical, recreational, ecological, and Wilderness character impact. It is not a decision taken lightly, and involves an array of technical specialists and public review and input.

The USFS closed Resolution shelter in 2009, following monitoring after the forest engineer identified it as a public health and safety hazard due to deterioration and age in 2008. At the time, the 80 year old native-log shelter was sliding off the ledge it was on, and had lost a lot of its dry masonry stone foundation.

Resolution Shelter is a product of the Civilian Conservation Corps era, built originally by the Appalachian Mountain Club. Management responsibility of the shelter passed to the USFS in the 1990s. The shelter, built of native horizontal logs, remained relatively untouched since its construction in the 1930s (replacing an original structure from 1912). By 2009, the shelter had reached a point of significant instability, held in place primarily by an unhealthy birch tree with extensive decay in supporting walls, with the dry set masonry foundation sliding down slope. 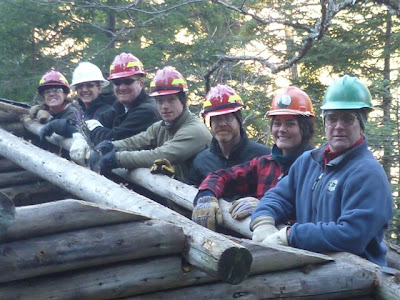 From the time of the closure in 2009 until November 2011, the USFS carefully evaluated the various factors at play in Resolution. Historical character and its candidacy for placement on the National Register of Historic Places was one factor. Public safety was a critical concern. Wilderness character, or that intangible sense of solitude and the absence of the trappings of civilization, is another. Natural resource factors included the severely eroded spur trail down to the campsite.

As the factors played out, the USFS proposed Resolution’s removal, and following a period of public comment, the Saco District Ranger Mike Martin signed the decision for Resolution’s removal. Both the scoping report and the final decision memo can be found here. During the scoping period, public comment was solicited. 5 comments were submitted, with three in support of removal, one in favor of removal and reconstruction of the shelter outside the wilderness area, and one suggesting keeping a shelter at the same location. The USFS responded to all comments, and the comments and responses can be found publicly in the decision memo. AMC submitted a letter of support for removal.

In the scoping report and the decision memo, the USFS determined that the historical significance of the shelter would be mitigated to retain the historic values; public safety, resource protection, and compliance with the management of Wilderness areas led to Resolution’s removal. 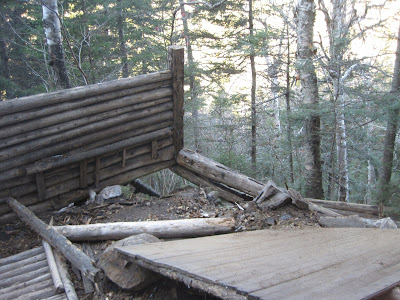 As the shelter came down on December 1, we spent a lot of time discussing the importance of the work we were doing. We noted the extensive rot and the extraordinary instability of the structure. We discussed the pros and cons of removal. We, also, discussed the Wilderness character and historical value.

Resolution has been dismantled and closed, and in the coming field season volunteers will remove the hardware and pack out the asphalt shingles, and disperse the logs. The site will be rehabilitated and the spur trail closed. Currently, camping options are offered at a Wilderness campsite on Stairs mountain and at Rocky Branch Shelter #1 2.2 miles further from the former site of Resolution. The USFS will monitor the area to determine if a Wilderness campsite is required.