“You gotta let it go full throttle. Don’t hold back. The saws need to be run wide open.” 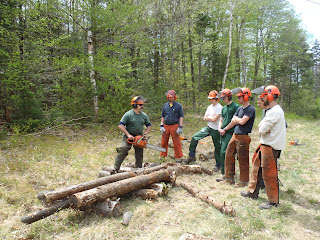 Running a chainsaw is a mix of careful decisions and confidence. Careful decisions regarding your maintenance of your equipment, your hazards and cut plan, and regarding your techniques. But also the confidence to run a saw strong (I swear I heard the phrase ‘let it run wild’) before you plunge it into the wood. Indeed, they need to be run ‘full throttle,’ in the words of John Lamanna, a skilled arborist, former Trail Crew member, and one of the leaders of AMC’s chainsaw course for the Trails Department. 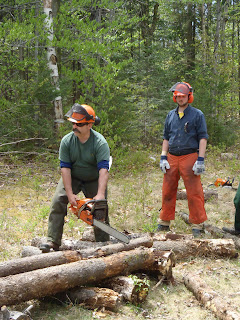 On the course this year were returning AMC White Mountain Professional Trail Crew, the Field Coordinator of the Backcountry Campsite Program, and two members of the Randolph Mountain Club Trail Crew. The curriculum of the course builds over two days, and requires no previous skill (indeed, the first time I took a course, I had never held a chainsaw at all before). The emphasis is on maintenance, safety, and technique. As a student, it is a rare opportunity to learn from skilled sawyers in a controlled and supported environment, to be guided through simple and complicated fells, and shown specific approaches to the variety of binds and snags that define every tree.

But first there is the basics: how and why a saw starts, and how to keep it running clean. The course starts on the first day with the basic operation and maintenance of the saw itself, including the very important mantra “a safe saw is a sharp saw.” Saws are opened up, chains are tightened, bars are removed and replaced, filters are cleaned, and files are drawn across the chain in steady and even strokes to sharpen each tooth.

Importantly, staff are outfitted in proper protective equipment for the duration of the entire course: chaps, helmets, earmuffs, long pants and full-leather boots, gloves, eye protection and face guards. Wearing the gear the entire course reinforces the feeling associated with running a saw, the heavy weight of chaps and the muffled sound through the ear muffs. And the helmet? I once has a timberframer refer to how a helmet saved his life, when the saw he had plunged into the wall of a log building he was working on kicked back out of the wall and ran directly into his helmet, the chain coming to a stop right in front of his face. 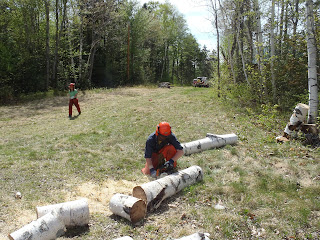 Next students spend time becoming comfortable holding and running the saw, plunging it into the tree and feeling how it moves through wood. They buck, they limb, they remove springpoles. They learn about the binds of trees, the tension and compression, and how the binds can catch the saw. They learn about the art of felling, about the use of wedges and the angle of a notched face cut.

It isn’t until the second day that the participants fell a tree. For the second day, the students and leaders head into the woods, where every tree tells its own story in the snags, in the hazards, and in the challenging terrain. Students felled birches and beeches, used wedges to ease the trees in the direction they wanted. 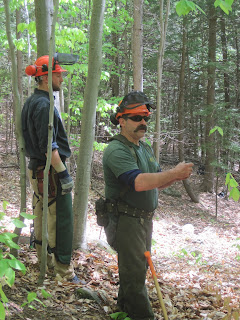 All the while, overlooking each student, was John, offering encouragement and gentle instruction. And, also, the unique John phrases that date from another era: ‘you have to tickle it a bit,’ ‘I don’t want to tell you how to run your railroad,’ and (my personal favorite) ‘tougher than a boiled owl.’ He talks powerfully with the weight of experience, of decades dedicated to trees and the art of the arborist. He bears a thick mustache and wears only green pants. John is an unassuming leader, easy to be around, and the perfect instructor for a chainsaw course for trail crew.

“What is your cut plan? Your escape route?,’ he asks each student. He watches each cut carefully, reminding them to use wedges and advising on their bore cuts. The patient removal of wood, sometimes fast and sometimes painstaking, ends when the tree starts to move on its own.

And, with a satisfying BOOM—each tree fell.

Except for the ones that got hung.

‘It’s ok,’ John said. ‘As long as the tree is still attached to the stump, you still have control.’ He guided each student how to safely bring each tree out of the hang up. 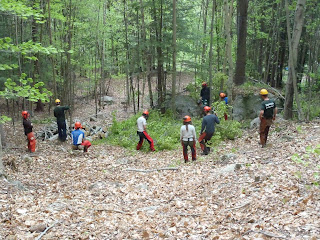 At the end of the day, what was left was excited satisfaction. Excitement from the young crew at using saws and felling trees, and excitement from the landowner with a head-start on their firewood. The crew returned to the trucks, carefully folded chaps and counted their gear items, accounting for axes, files, and first aid kits, displaying the care and respect for tools that Trail Crew is known for.

Watching John put his tools away into the back of his truck is the best proof of his skills in his line of work. Listening to those around him, John didn’t talk much as he went through his routine, dismantling his rigging and putting his saw in its particular place. It is the kind of efficient movement that only comes from years of experience. I’ve seen it in experienced mushers, who set up or break down their gear around their truck without seeming to expend any energy or thinking at all.

AMC leads chainsaw courses elsewhere in the region, as does the MATC, GMC, and ATC (as mentioned above). For the experienced there is something to be learned with every tree felled, and for the inexperienced these courses are the opportunity to encounter the art and poetry of the chainsaw in a safe, supportive, and controlled environment.